I know some of you thought I had been knocked out of commission by the smoke this summer but I am alive and well and back just in time to give you some entertainment before this weekend’s playoffs.  As regular readers of my columns are well aware, I am somewhat of a writing kleptomaniac.  I love stealing column ideas and formats from other, much more established writers, and putting my own little spin on them.  The reason for this is simple; it’s much easier to take a great column, ruin it a little, and still be left with something good than it is to come up with a decently good concept all on your own.  In other words, I’m lazy.  Continuing on with that trend, this week I plan to steal an idea from my esteemed colleague[i] Mr. Peter King.  In my first column this season we looked at some of the great myths of the league, in column number two we examined some of the unmistakable truths, this week we will look at some of my own personal (sometimes unfounded) beliefs as I blatantly copy Mr. King’s Ten Things I Think I Think…

1. (No offense intended to the Red Sox and the Territorial Final, but…) I think that the HBC vs Slades semi-final at the Territorials was one of the best games that I’ve played in in years.  It had everything you could possibly want out of a fastball game… a head-to-head duel between two of the best pitchers in the league… a game filled with huge moments and clutch situations… extra innings… some fantastic fielding and very few errors… a trip to the finals on the line… some epic coaching decisions[ii]… and, of course, a Slades loss.

2. I think that the Red Sox making the finals of the Territorials was the biggest surprise that we’ve seen since the 2012 Pirate Tourney when Slades finished 6th.  Once again, no offense intended to the Red Sox but I don’t think anyone had them picked to make the finals of the Territorials.  The last four teams to win the Territorials[iii] were all in the tournament and all had better pre-tourney odds of making the finals than the Sox.  But the Sox took advantage of some fortunate playoff seeding, some hot bats, and a choking O’s squad to make a fantastic run to the finals.  They came up a little short in the finals but a big congrats to the entire team on their exceptional performance in the tourney.  Hopefully they can put together another run this weekend.

3. I think that I’m amazed that of all the pitchers in the league, Matt Mossman is the one guy that seems to have HBC’s number on the mound.  Standing in the batter’s box watching the pitches come in I don’t understand how it happens… but the results don’t lie.  In the Territorial finals he held the HBC bats relatively quiet for 5 innings and gave the Sox a chance to win[iv].  Then, last week, in his first appearance against them since the final, he looked a little shaky early, giving up 8 runs in two innings, but then he shut them down for the last 5 innings as the Red Sox clawed back for a 10-9 victory.  He’s the Eddie Harris of the YK Fastball league… and I mean that in the most complimentary way possible[v].

4. I think that the fantasy draft tournament idea is fabulous and needs to happen.  For those of you that have yet to hear about this genius idea here’s how it would work.  4 captains.  Everyone else that wants to play in the tournament is up for grabs.  Everyone comes out to live draft at BP’s, the Elks, or the Monkey Tree[vi] and has to sit around waiting for their name to be called.  Some added wrinkles to make it even more entertaining.

5. I think that after last week’s performance, Ryan “Traitorous[vii]” Thiel has ascended to the number 1 spot on the Ryan Pitching rankings[viii].  For those of you that missed it, T-Bone went 5 strong innings, striking out 7 and getting a much needed W for Slades over Sub Arctic as they took another step toward locking down the #1 spot in the standings heading to the playoffs.  There could be some more movement to the Ryan pitching rankings coming up soon though as rumour has it, Mr. Nichols will be taking the mound for his first ever appearance this evening.

6. I think that for a league full of relatively intelligent guys, I continue to be amazed at the complete lack of understanding of the “courtesy runner for the catcher” rule.  The amount of confusion and incomprehension as to who should be running for the catcher boggles my mind at times.  Being the Good Samaritan that I am, I shall attempt to clarify this rule for all and make it a little easier for you to figure out who the runner is.  Here is a simple 5-step set of instructions that should make it easy to determine your runner[ix]:

It really is that simple.

7. I think that the divide between Slades management and prima donna Ryan Strain has been growing at an exponential rate these past few weeks.  Despite putting up declining numbers with every passing season, Mr. Strain continues to demand more money, more benefits, and more outrageous perks on a seemingly daily basis.  The frustration recently boiled over when he decided to saunter into the Slades dug-out 2 hours late for a game that he was supposed to be pitching.  When questioned on it his response was to declare that he hadn’t yet received his monthly allotment of virgins for August and that he’d show up when he damn well pleased until his contract was honoured.  Slades management has responded in swift fashion, reportedly already agreeing to an offseason deal that will see the long-time Slades all-star sent to Sub-Arctic in exchange for the speedy defensive wizard, Rick Morrison.  As we have passed the trade deadline, this deal cannot be finalized until the end of the season, but using my inside sources I’ve been able to acquire a preliminary copy of the letter that Mr. Strain will be receiving on August 18th. 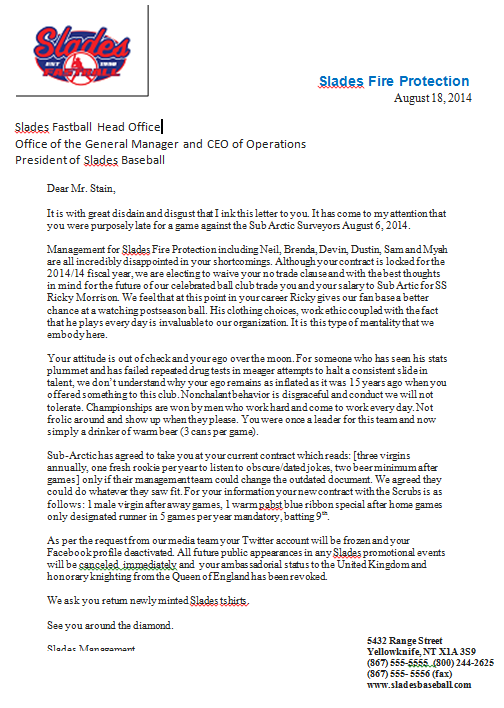 It’s sad that it’s come to this but when egos get that far out of control, sometimes drastic measures are called for.  Hopefully Rhino’s friends, family, and entourage can rein him in and help him refocus on his new team.

8. I think I’m a little skeptical of it actually coming true but I’m going to stick to my preseason predictions where I said the Orioles would get their first tournament win ever this year.  Yes, this means I’m calling the O’s to win the league playoffs this weekend.  Maybe it’s a little far-fetched when the number 2 chucker they have available to pitch this weekend just gave up 17 runs to Sub-Arctic in his first ever appearance, but in a year when Vette hits 3 home runs in a game, the Red Sox make the Territorial finals, and Torrey “Chinstrap” McLaren is hitting over .600, anything can happen[xi].

9. I think that despite my prediction to the contrary in the previous item, there will be very little in the way of upsets this tournament.  At this point in the season the pitchers and catchers know all the hitters and vice versa.  There aren’t a whole lot of surprises that are going to happen[xii].  The cream of the crop should rise to the top and I expect to see the best of the best playing on Sunday evening[xiii].

10. I think these are my quick-hit, not-entirely-fastball-related thoughts for this month…

Finally, before I end things for today, I want to send out a big thank you to all of the YK Fastball supporters out there who take the time to come out to our games and cheer us on, support our beer gardens, and even read the inanity that I spew in my articles.  Much appreciated everyone.  Hope to see you this weekend!!

[i] I use the term “colleague” very loosely.

[ii] Rug: “We’ve got second base open and Theil is on deck, should we walk Matty?”

[iv] Mossman gave up 4 runs through 5 innings and it wasn’t until Rick was brought in that HBC broke it open in the bottom of 6.

[vi] Or wherever we decide to hold the draft.

[viii] Passing Ryan Strain and Ryan Nichols in the process.

[ix] Robbie J, feel free to print these out and keep them in your back pocket during games.

[x] IMPORTANT NOTE: If you reach the top of the batting order, go down to the number 9 spot and continue.

[xi] And the addition of Kirk to their line-up for the weekend makes them that much more potent on the bats than they already were.

[xiii] And of course by this I mean an O’s/HBC final.

[xiv] Although, now that Vette is tabulating the stats for the entire season, I may be able to put together a pre-fantasy draft version of the Player Trade Value Rankings to help out all the captains as the draft approaches.  Stay tuned.

Sidenote: On top of Jimmy keeping track of the stats we’ve now got Couvrette adding them up???  This should make for some entertaining statistics.

[xv] For all you coaches and captains out there, my contract with the Regulators allows me to opt out before this season if I so choose.  Just in case you were wondering.

[xvi] Note that this average includes Griffey’s final 11 seasons when was basically a league average player.  If you look at just the first 12 years of his career he had a 76.0 total, or 6.3/year which would trail only Bonds and Pujols.

[xvii]Also of note: Mike Trout is averaging 6.6 per season through his first 4 years in the league.